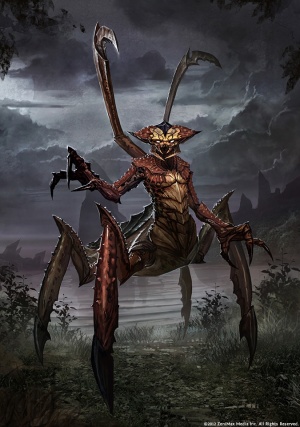 The dreugh have two distinct morphologies: The Water Dreugh and the Land Dreugh. Dreugh evolve into Land Dreugh at a period in their lifecycle called Karvinasim, where they grow legs and spend about a year on dry land. Dreugh are primarily found in the eastern areas of Tamriel, but can likely also be found anywhere coastal. Land Dreugh can be found as far inland as Cyrodiil.

Dreugh, according to legend, were once more intelligent and civilized than they are presently. Mankar Camoran's Mythic Dawn Commentaries makes reference to Dreugh-Kings, but protracted conflict with the Dunmer (who harvest the dreugh for their hides and wax) has caused them to devolve further and further. The dreugh were said to worship a creature known as the Ruddy Man, which is believed to be a manifestation of Molag Bal.