The Ruins of Kemel-Ze, Part 3 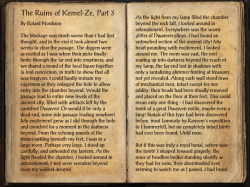 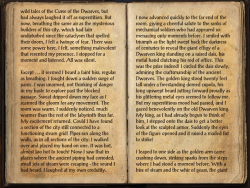 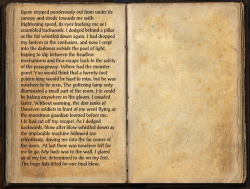 The Ruins of Kemel-Ze, Part 3

The blockage was much worse than I had first thought, and in the end it took almost two weeks to clear the passage. The diggers were as excited as I was when their picks finally broke through the far end into emptiness, and we shared a round of the local liquor together (a foul concoction, in truth) to show that all was forgiven. I could hardly restrain my eagerness as they enlarged the hole to allow entry into the chamber beyond. Would the passage lead to entire new levels of the ancient city, filled with artifacts left by the vanished Dwarves? Or would it be only a dead end, some side passage leading nowhere? My excitement grew as I slid through the hole and crouched for a moment in the darkness beyond. From the echoing sounds of the stones rattling beneath my feet, I was in a large room. Perhaps very large. I stood up carefully, and unhooded my lantern. As the light flooded the chamber, I looked around in astonishment. Here were wonders beyond even my wildest dreams!

As the light from my lamp filled the chamber beyond the rock fall, I looked around in astonishment. Everywhere was the warm glitter of Dwarven alloys. I had found an untouched section of the ancient city! My heart pounding with excitement, I looked around me. The room was vast, the roof soaring up into darkness beyond the reach of my lamp, the far end lost in shadows with only a tantalizing glimmer hinting at treasures not yet revealed. Along each wall stood rows of mechanical men, intact except for one oddity: their heads had been ritually removed and placed on the floor at their feet. This could mean only one thing - I had discovered the tomb of a great Dwarven noble, maybe even a king! Burials of this type had been discovered before, most famously by Ransom's expedition to Hammerfell, but no completely intact tomb had ever been found. Until now.

But if this was truly a royal burial, where was the tomb? I stepped forward gingerly, the rows of headless bodies standing silently as they had for eons, their disembodied eyes seeming to watch me as I passed. I had heard wild tales of the Curse of the Dwarves, but had always laughed it off as superstition. But now, breathing the same air as the mysterious builders of this city, which had lain undisturbed since the cataclysm that spelled their doom, I felt a twinge of fear. There was some power here, I felt, something malevolent that resented my presence. I stopped for a moment and listened. All was silent.

Except … it seemed I heard a faint hiss, regular as breathing. I fought down a sudden surge of panic. I was unarmed, not thinking of danger in my haste to explore past the blocked passage. Sweat dripped down my face as I scanned the gloom for any movement. The room was warm, I suddenly noticed, much warmer than the rest of the labyrinth thus far. My excitement returned. Could I have found a section of the city still connected to a functioning steam grid? Pipes ran along the walls, as in all sections of the city. I walked over and placed my hand on one. It was hot, almost too hot to touch! Now I saw that in places where the ancient piping had corroded, small jets of steam were escaping - the sound I had heard. I laughed at my own credulity.

I now advanced quickly to the far end of the room, giving a cheerful salute to the ranks of mechanical soldiers who had appeared so menacing only moments before. I smiled with triumph as the light swept back the darkness of centuries to reveal the giant effigy of a Dwarven king standing on a raised dais, his metal hand clutching his rod of office. This was the prize indeed! I circled the dais slowly, admiring the craftsmanship of the ancient Dwarves. The golden king stood twenty feet tall under a freestanding domed cupola, his long upswept beard jutting forward proudly as his glittering metal eyes seemed to follow me. But my superstitious mood had passed, and I gazed benevolently on the old Dwarven king. My king, as I had already begun to think of him. I stepped onto the dais to get a better look at the sculpted armor. Suddenly the eyes of the figure opened and it raised a mailed fist to strike!

I leaped to one side as the golden arm came crashing down, striking sparks from the steps where I had stood a moment before. With a hiss of steam and the whir of gears, the giant figure stepped ponderously out from under its canopy and strode towards me with frightening speed, its eyes tracking me as I scrambled backwards. I dodged behind a pillar as the fist whistled down again. I had dropped my lantern in the confusion, and now I crept into the darkness outside the pool of light, hoping to slip between the headless mechanisms and thus escape back to the safety of the passageway. Where had the monster gone? You would think that a twenty-foot golden king would be hard to miss, but he was nowhere to be seen. The guttering lamp only illuminated a small part of the room. He could be hiding anywhere in the gloom. I crawled faster. Without warning, the dim ranks of Dwarven soldiers in front of me went flying as the monstrous guardian loomed before me. He had cut off my escape! As I dodged backwards, blow after blow whistled down as the implacable machine followed me relentlessly, driving me into the far corner of the room. At last there was nowhere left for me to go. My back was to the wall. I glared up at my foe, determined to die on my feet. The huge fists lifted for one final blow.