The Ruins of Kemel-Ze, Part 2 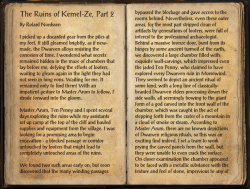 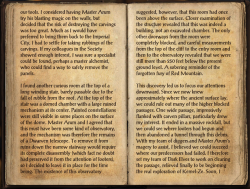 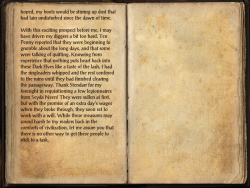 The Ruins of Kemel-Ze, Part 2

I picked up a discarded gear from the piles at my feet. It still gleamed brightly, as if new-made, the Dwarven alloys resisting the corrosion of time. I wondered what secrets remained hidden in the maze of chambers that lay before me, defying the efforts of looters, waiting to gleam again in the light they had not seen in long eons. Waiting for me. It remained only to find them! With an impatient gesture to Master Arum to follow, I strode forward into the gloom.

Master Arum, Ten Penny and I spent several days exploring the ruins while my assistants set up camp at the top of the cliff and hauled supplies and equipment from the village. I was looking for a promising area to begin excavation - a blocked passage or corridor untouched by looters that might lead to completely untouched areas of the ruins.

We found two such areas early on, but soon discovered that the many winding passages bypassed the blockage and gave access to the rooms behind. Nevertheless, even these outer areas, for the most part stripped clean of artifacts by generations of looters, were full of interest to the professional archaeologist. Behind a massive bronze door, burst from its hinges by some ancient turmoil of the earth, we discovered a large chamber filled with exquisite wall-carvings, which impressed even the jaded Ten Penny, who claimed to have explored every Dwarven ruin in Morrowind. They seemed to depict an ancient ritual of some kind, with a long line of classically-bearded Dwarven elders processing down the side walls, all seemingly bowing to the giant form of a god carved into the front wall of the chamber, which was caught in the act of stepping forth from the crater of a mountain in a cloud of smoke or steam. According to Master Arum, there are no known depictions of Dwarven religious rituals, so this was an exciting find indeed. I set a team to work prying the carved panels from the wall, but they were unable to even crack the surface. On closer examination the chamber appeared to be faced with a metallic substance with the texture and feel of stone, impervious to any of our tools. I considered having Master Arum try his blasting magic on the walls, but decided that the risk of destroying the carvings was too great. Much as I would have preferred to bring them back to the Imperial City, I had to settle for taking rubbings of the carvings. If my colleagues in the Society showed enough interest, I was sure a specialist could be found, perhaps a master alchemist, who could find a way to safely remove the panels.

I found another curious room at the top of a long winding stair, barely passable due to the fall of rubble from the roof. At the top of the stair was a domed chamber with a large ruined mechanism at its center. Painted constellations were still visible in some places on the surface of the dome. Master Arum and I agreed that this must have been some kind of observatory, and the mechanism was therefore the remains of a Dwarven telescope. To remove it from ruins down the narrow stairway would require its complete disassembly (which fact no doubt had preserved it from the attention of looters), so I decided to leave it in place for the time being. The existence of this observatory suggested, however, that this room had once been above the surface. Closer examination of the structure revealed that this was indeed a building, not an excavated chamber. The only other doorways from the room were completely blocked, and careful measurements from the top of the cliff to the entry room and then to the observatory revealed that we were still more than 250 feet below the present ground level. A sobering reminder of the forgotten fury of Red Mountain.

This discovery led us to focus our attentions downward. Since we now knew approximately where the ancient surface lay, we could rule out many of the higher blocked passages. One wide passage, impressively flanked with carven pillars, particularly drew my interest. It ended in a massive rockfall, but we could see where looters had begun and then abandoned a tunnel through this debris. With my team of diggers and Master Arum's magery to assist, I believed we could succeed where our predecessors had failed. I therefore set my team of Dark Elves to work on clearing the passage, relieved finally to be beginning the real exploration of Kemel-Ze. Soon, I hoped, my boots would be stirring up dust that had lain undisturbed since the dawn of time.

With this exciting prospect before me, I may have driven my diggers a bit too hard. Ten Penny reported that they were beginning to grumble about the long days, and that some were talking of quitting. Knowing from experience that nothing puts heart back into these Dark Elves like a taste of the lash, I had the ringleaders whipped and the rest confined to the ruins until they had finished clearing the passageway. Thank Stendarr for my foresight in requisitioning a few legionnaires from Seyda Neen! They were sullen at first, but with the promise of an extra day's wages when they broke through, they soon set to work with a will. While these measures may sound harsh to my readers back in the comforts of civilization, let me assure you that there is no other way to get these people to stick to a task.