The Ruins of Kemel-Ze, Part 1 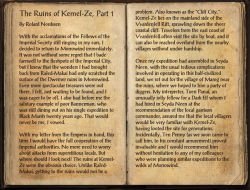 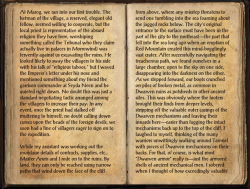 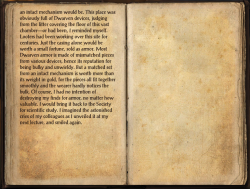 The Ruins of Kemel-Ze, Part 1

With the acclamations of the Fellows of the Imperial Society still ringing in my ears, I decided to return to Morrowind immediately. It was not without some regret that I bade farewell to the fleshpots of the Imperial City, but I knew that the wonders I had brought back from Raled-Makai had only scratched the surface of the Dwemer ruins in Morrowind. Even more spectacular treasures were out there, I felt, just waiting to be found, and I was eager to be off. I also had before me the salutary example of poor Bannerman, who was still dining out on his single expedition to Black Marsh twenty years ago. That would never be me, I vowed.

With my letter from the Empress in hand, this time I would have the full cooperation of the Imperial authorities. No more need to worry about attacks from superstitious locals. But where should I look next? The ruins at Kemel-Ze were the obvious choice. Unlike Raled-Makai, getting to the ruins would not be a problem. Also known as the "Cliff City," Kemel-Ze lies on the mainland side of the Vvardenfell Rift, sprawling down the sheer coastal cliff. Travelers from the east coast of Vvardenfell often visit the site by boat, and it can also be reached overland from the nearby villages without undue hardship.

Once my expedition had assembled in Seyda Neen, with the usual tedious complications involved in operating in this half-civilized land, we set out for the village of Marog near the ruins, where we hoped to hire a party of diggers. My interpreter, Tuen Panai, an unusually jolly fellow for a Dark Elf whom I had hired in Seyda Neen at the recommendation of the local garrison commander, assured me that the local villagers would be very familiar with Kemel-Ze, having looted the site for generations. Incidentally, Ten Penny (as we soon came to call him, to his constant amusement) proved invaluable and I would recommend him without hesitation to any of my colleagues who were planning similar expeditions to the wilds of Morrowind.

At Marog, we ran into our first trouble. The hetman of the village, a reserved, elegant old fellow, seemed willing to cooperate, but the local priest (a representative of the absurd religion they have here, worshiping something called the Tribunal who they claim actually live in palaces in Morrowind) was fervently against us excavating the ruins. He looked likely to sway the villagers to his side with his talk of "religious taboos," but I waved the Empress's letter under his nose and mentioned something about my friend the garrison commander at Seyda Neen and he quieted right down. No doubt this was just a standard negotiating tactic arranged among the villagers to increase their pay. In any event, once the priest had stalked off muttering to himself, no doubt calling down curses upon the heads of the foreign devils, we soon had a line of villagers eager to sign on to the expedition.

While my assistant was working out the mundane details of contracts, supplies, etc., Master Arum and I rode on to the ruins. By land, they can only be reached using narrow paths that wind down the face of the cliff from above, where any misstep threatens to send one tumbling into the sea foaming about the jagged rocks below. The city's original entrance to the surface must have been in the part of the city to the northeast—the part that fell into the sea long ago when an eruption of Red Mountain created this mind-bogglingly vast crater. After successfully navigating the treacherous path, we found ourselves in a large chamber, open to the sky on one side, disappearing into the darkness on the other. As we stepped forward, our boots crunched on piles of broken metal, as common in Dwarven ruins as potsherds in other ancient sites. This was obviously where the looters brought their finds from deeper levels, stripping off the valuable outer casings of the Dwarven mechanisms and leaving their innards here—easier than lugging the intact mechanisms back up to the top of the cliff. I laughed to myself, thinking of the many warriors unwittingly walking around Tamriel with pieces of Dwarven mechanisms on their backs. For that, of course, is what most "Dwarven armor" really is—just the armored shells of ancient mechanical men. I sobered when I thought of how exceedingly valuable an intact mechanism would be. This place was obviously full of Dwarven devices, judging from the litter covering the floor of this vast chamber—or had been, I reminded myself. Looters had been working over this site for centuries. Just the casing alone would be worth a small fortune, sold as armor. Most Dwarven armor is made of mismatched pieces from various devices, hence its reputation for being bulky and unwieldy. But a matched set from an intact mechanism is worth more than its weight in gold, for the pieces all fit together smoothly and the wearer hardly notices the bulk. Of course, I had no intention of destroying my finds for armor, no matter how valuable. I would bring it back to the Society for scientific study. I imagined the astonished cries of my colleagues as I unveiled it at my next lecture, and smiled again.