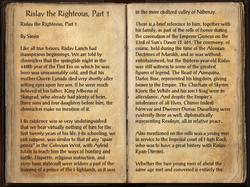 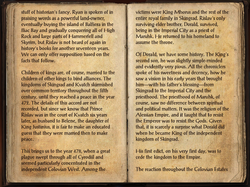 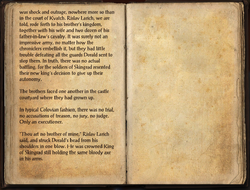 Like all true heroes, Rislav Larich had inauspicious beginnings. We are told by chroniclers that the springtide night in the 448th year of the First Era on which he was born was unseasonably cold, and that his mother Queen Lynada died very shortly after setting eyes upon her son. If he were much beloved of his father, King Mhorus of Skingrad, who already had plenty of heirs, three sons and four daughters before him, the chroniclers make no mention of it.

His existence was so very undistinguished that we hear virtually nothing of him for the first twenty years of his life. His schooling, we can suppose, was similar to that of any "spare prince" in the Colovian West, with Ayleid tutors to teach him the ways of hunting and battle. Etiquette, religious instruction, and even basic statecraft were seldom a part of the training of a prince of the Highlands, as it was in the more civilized valley of Nibenay.

There is a brief reference to him, together with his family, as part of the rolls of honor during the coronation of the Emperor Gorieus on the 23rd of Sun's Dawn 1E 461. The ceremony, of course, held during the time of the Alessian Doctrines of Marukh, and so was without entertainment, but the thirteen-year-old Rislav was still witness to some of the greatest figures of legend. The Beast of Anequina, Darloc Brae, represented his kingdom, giving honor to the Empire. The Chieftain of Skyrim Kjoric the White and his son Hoag were in attendance. And despite the Empire's intolerance of all Elves, Chimer Indoril Nerevar and Dwemer Dumac Dwarfking were evidently there as well, diplomatically representing Resdayn, all in relative peace.

Also mentioned on the rolls was a young mer in service to the Imperial court of High Rock, who was to have a great history with Rislav. Ryan Direnni.

Whether the two young men of about the same age met and conversed is entirely the stuff of historian's fancy. Ryan is spoken of in praising words as a powerful land-owner, eventually buying the island of Balfiera in the Iliac Bay and gradually conquering all of High Rock and large parts of Hammerfell and Skyrim, but Rislav is not heard of again in history's books for another seventeen years. We can only offer supposition based on the facts that follow.

Children of kings are, of course, married to the children of other kings to bind alliances. The kingdoms of Skingrad and Kvatch skirmished over common territory throughout the fifth century, until they reached a peace in the year 472. The details of this accord are not recorded, but since we know that Prince Rislav was in the court of Kvatch six years later, as husband to Belene, the daughter of King Justinius, it is fair to make an educated guess that they were married then to make peace.

This brings us to the year 478, when a great plague swept through all of Cyrodiil and seemed particularly concentrated in the independent Colovian West. Among the victims were King Mhorus and the rest of the entire royal family in Skingrad. Rislav's only surviving elder brother, Dorald, survived, being in the Imperial City as a priest of Maruhk. He returned to his homeland to assume the throne.

Of Dorald, we have some history. The King's second son, he was slightly simple-minded and evidently very pious. All the chroniclers spoke of his sweetness and decency, how he saw a vision in his early years that brought him—with his father's blessing—from Skingrad to the Imperial City and the priesthood. The priesthood of Maruhk, of course, saw no difference between spiritual and political matters. It was the religion of the Alessian Empire, and it taught that to resist the Emperor was to resist the Gods. Given that, it is scarcely a surprise what Dorald did when he became King of the independent kingdom of Skingrad.

His first edict, on his very first day, was to cede the kingdom to the Empire.

The reaction throughout the Colovian Estates was shock and outrage, nowhere more so than in the court of Kvatch. Rislav Larich, we are told, rode forth to his brother's kingdom, together with his wife and two dozen of his father-in-law's cavalry. It was surely not an impressive army, no matter how the chroniclers embellish it, but they had little trouble defeating all the guards Dorald sent to stop them. In truth, there was no actual battling, for the soldiers of Skingrad resented their new king's decision to give up their autonomy.

The brothers faced one another in the castle courtyard where they had grown up.

In typical Colovian fashion, there was no trial, no accusations of treason, no jury, no judge. Only an executioner.

"Thou art no brother of mine," Rislav Larich said, and struck Dorald's head from his shoulders in one blow. He was crowned King of Skingrad still holding the same bloody axe in his arms.