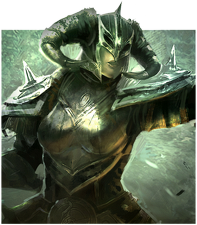 The Nords are one of the three races representing the Ebonheart Pact. Their homeland is Skyrim and their leader is King Jorunn.

Nord were the first human race that arrived in Tamriel. They do not have anything special except fair hair and pale skin. They are more muscular than most other races. Only orcs are larger. They have strong bodies and they are good melee warriors. Many of them live in Skyrim - land of ice, mountains and snow. Nords respect strength and they are prideful people who like glory and honor.

They are people from the north and have resistance to cold.

After leaving Coldharbour, the player will awake in the Bleakrock Village on Bleakrock Isle.