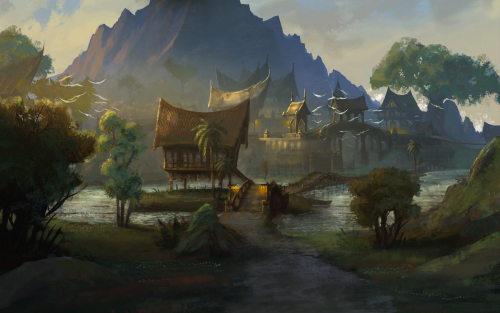 The island off the south coast of Elsweyr is named after the Khajiiti godess of weather and the sky, who is usually represented as a great hawk. She finds many worshipers among the cat-folk's sailors and farmers, especially those who grow moon-sugar cane.

Khenarthi's Roost is a small island region located to the west of southern Elsweyr. It is inhabited by Khajiit and is part of the Aldmeri Dominion. It can be reached by boat from Vulkhel Guard.

There are 6 skyshards scattered around Khenarthi's Roost.

This region was originally the starting area for the Aldmeri Dominion but that was changed to Vulkhel Guard late in the beta phase.