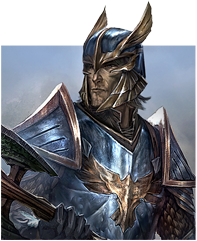 The Altmer, or High Elves, are one of the three races representing the Aldmeri Dominion. Their homeland is the Summerset Isles.

Altmer are among the tallest of the races of Nirn. They resemble other elves with prominent pointed ears and almond-shaped eyes. They are smaller physiques built than humans and do not have a high bodily strength. This disadvantages them in melee combat. Their physical disadvantages are compensated by intelligence and magical abilities. Altmer are known for their outstanding magical skills. They are probably the best mages in Tamriel.

Their magical skill also makes them susceptible to magical attacks; however, they have strong resistance to disease.