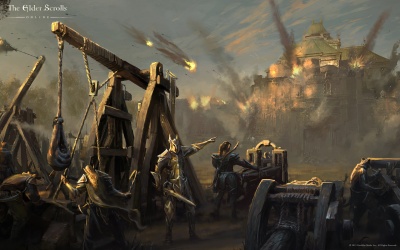 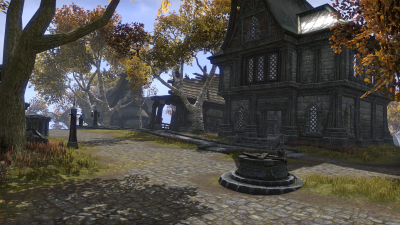 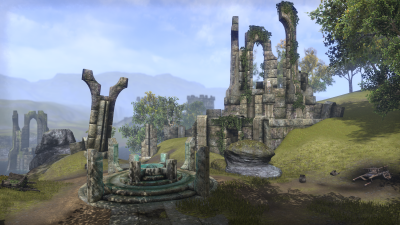 Cyrodiil is the largest region on the continent of Tamriel and home to the Imperials. In The Elder Scrolls: Online, the Player vs Player (PvP) events will take place there.

The Empire of Tamriel encompasses the nine Imperial provinces: Skyrim, High Rock, Hammerfell, Summerset Isle, Valenwood, Elsweyr, Black Marsh, Morrowind, and the ancient Imperial province itself, Cyrodiil. Morrowind was among the last of the provinces to be integrated into the Empire, and because it was added by treaty, and not by conquest, Morrowind retains exceptional power to define local law by reference to ancient Great House precedents.

Cyrodiil is the cradle of Human Imperial high culture on Tamriel. It is the largest region of the continent, and most is endless jungle. The Imperial City is in the heartland, the fertile Nibenay Valley. The densely populated central valley is surrounded by wild rain forests drained by great rivers into the swamps of Argonia and Topal Bay. The land rises gradually to the west and sharply to the north. Between its western coast and its central valley are deciduous forests and mangrove swamps.

The Ayleids, or Heartland High Elves, ruled Cyrodiil in the long ages of Myth before the beginning of recorded history. One of the earliest recorded dates, in fact, is the Fall of White Gold Tower in 1E 243, which is commonly assumed to mark the end of the Ayleids.

Although Ayleid rule over all of Cyrodiil was indeed broken in 1E 243, this was only one of the most obvious stages near the end of a long decline. The first two centuries of the First Era saw increasing strife between the great Ayleid lords of Cyrodiil. Alessia appears to have taken advantage of a period of civil war to launch her uprising. Imperial historians have traditionally attributed her victory to intervention from Skyrim, but it appears that she had at least as much help from rebel Ayleid lords during the siege of White Gold Tower.

The popular image of the Ayleids as brutal slavemasters is based in fact, of course, but it is less well-known that a number of Ayleid princes continued to rule parts of Cyrodiil after 263, as vassals of the new Empress of Cyrodiil. This suggests either that Ayleid rule was not universally detested, or that Alessia and her successors were more pragmatic than is traditionally believed, or perhaps some of both.

In any event, excavations at a number of Ayleid sites show continued occupation and even expansion during the so-called Late Ayleid Period (1E 243 - c. 498). At first, many Ayleid lords continued to rule as vassals of the new human regime. In some cases, Ayleid supporters of Alessia were even rewarded with new lands taken from slain enemies. It is not clear to what extent human slavery continued under the Cyrodilic Empire. Humans continued to dwell in the Ayleid-ruled areas of Cyrodiil, but there is nothing definitive to show under what terms.

This was an uneasy relationship from the beginning, and was not destined to last long. Resentment at the continued presence of Ayleid nobles within the Empire was a contributing factor to the rise of the so-called Alessian Order founded by Marukh. The first victims of the Alessians were the Ayleids of Cyrodiil. In the early 300s, the surviving Ayleid communities in human-ruled areas were obliterated one by one, the refugees temporarily swelling the power of the remaining Ayleid lordships.

Then in 361, the Alessians gained control of the Empire and enforced the Alessian Doctrines throughout its domain. The Ayleid lordships were abolished. Enforcement of this decree does not appear to have required much direct violence -- it seems that by this point the balance of power was so overwhelmingly against them, and their fate so long foreshadowed, that most of the remaining Ayleids simply left Cyrodiil, eventually being absorbed into the Elven populations of Valenwood and High Rock. Indeed, the rise of the Direnni Hegemony may be linked to this exodus of Ayleids from Cyrodiil (a connection so far little studied by historians).

Still, a remnant Ayleid population seems to have survived the rule of the Alessians, because we hear of "the last king of the Ayleids" joining the Battle of Glenumbria Moors where the Dirennis decisively defeated the Alessians in 482. How this king's people survived the preceding century is unknown. We do not even know who they were, although recent research points to Nenalata as the possible resting place of this "last king." Unfortunately, in the current state of the Empire, funds are no longer available for proper scientific investigation of such extensive ruins, so the answer to these questions will have to be left to future generations.

— The Last King of the Ayleids

Around the lake, one can find several posters with a slaughterfish warning. And indeed, if one challenges fate too much and swims too far away from the beach, the fish will attack. 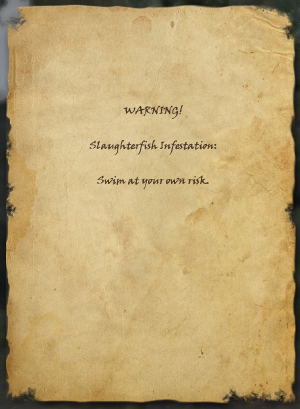 Despite the dire situation in Cyrodiil, the risk of being caught by the other faction and the ongoing war there, Cyrodiil still offers a few quests for those bold enough to travel the through the wilderness. Most quests of course were created for larger groups, but there are also some for players who travel alone, like several scout quests, which one can acquire as a task from the Scouting Mission Board in the homebase.

Note: The quests may vary from faction to faction. Since I only had the chance to join Cyrodiil quests on the Ebonheart side so far, I just could add the few quests I encountered there. Feel free to add more!

When travelling Cyrodiil, players will find Ayleid Ruins all over the place. While some offer a dungeon with dangerous inhabitants, some have a well (so far I only discovered these on the outside), where players can gain a health boost for ~10 Minutes. 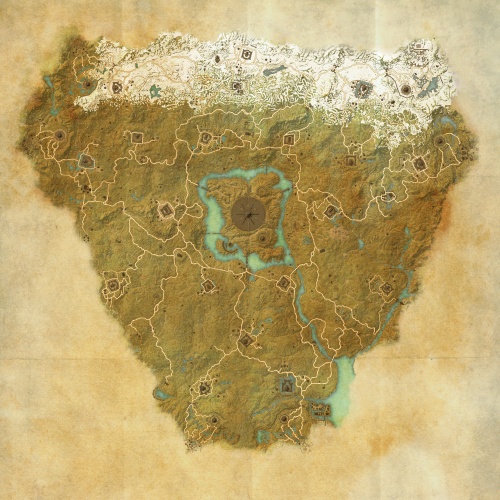